Recently The New York Times devoted its Sunday “Opinion” section to the theme, “I was wrong,” and several of its leading columnists each penned an essay “I was wrong about….”

This set us thinking.

And with hardly any hesitation and no second-guessing, we realized it would be salutary–bordering on cleansing–to publish an open “confession of error” about views we’ve shared in these pages.  Our only ground rules were that it had to be an issue we’d published one or more columns about, not just private musings or speculations here at the office that we never reduced to written pieces.

Here you are, then.

(1) The ranks of non-equity partners as  a share of all lawyers (associates, counsel and non-equities, and partners) cannot continue to grow.

This position may have owed more to nostalgia (“This is not the law firm model I grew up with!”) and confusing transitory stages for structural weakness, than to foresighted analysis.  To be sure, as the prodigiously prolific Bill Henderson has amply demonstrated, the “associate:partner” links crossed over ten years ago and never will cross again the other way: 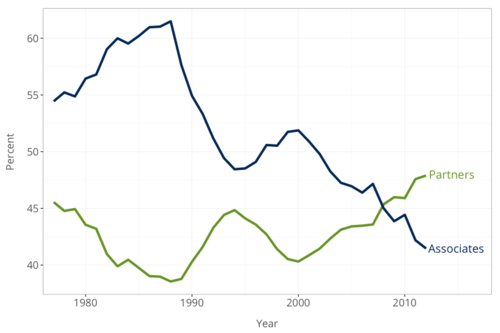 30-year trend of NLJ 250 law firm data: Percentage of lawyers who are “associates” vs. those who are “partners” (including non-equity partners).

And this shows the relentless growth of the non-equity and “other” tiers over nearly as long a timeframe: 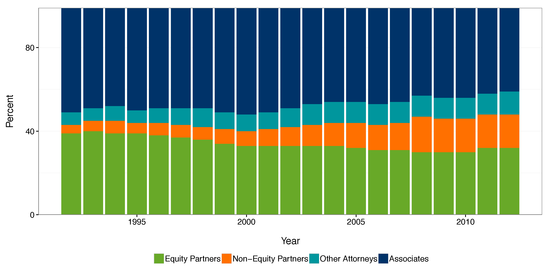 So the data–we do love facts hereabouts, even the awkward ones–refutes us conclusively.  We were wrong.

Turning briefly to the future of this trend–the seemingly irreversible growth of the non-equity tier–are we upbeat about this development?

No.  Let us put it more strongly:  Danger may lie ahead.  Consider the following bill of particulars about all that constitutes latent peril within the non-equity explosion:

Be careful out there.

The most solid, credible, and recent evidence (thank you, Thomson Reuters) on the size of the “Legal Services” market in the US shows private, for-profit law firms (that would be you) with about 62% of the ~$500-billion annual market, in-house law departments with about 35%, and NewLaw a distant distant (get me those binoculars!) third at maybe 3%.

[Data hygiene footnote:  “Legal services” embraces all material categories of suppliers of same:  So gross revenue to private law firms (the 62%), large corporations’ spending on their own in-house legal departments (35%) and revenue going to NewLaw (~3%).]

Why did we get this one wrong?

Frankly I’m still somewhat in awe of how wrong we were (try, “not even close” in our mental model, although we never published or internally extrapolated numeric estimates), but the uptake rate of the industry for new companies, processes, and techniques is molasses slow and the chicken/egg problem gnarlier than we gave it credit for.  (“Try this new and better thing!” “Who else is doing it?”  “But don’t you want to be innovative?”  “Who else is doing it?”  [etc.]).

The heck they do.

This is surely the longest-lived and most broadly applied of our lineup of “wrong” positions.  We, and you, hear virtually every day some authority or another declaring that lawyers trust the evidence, chase down the evidence, master the evidence, drill down into the evidence.  “‘Tis a truth universally acknowledged,” in the immortal phrase, but it is wrong.

Now, that doesn’t mean we can’t still wish it were true.  It would simplify our analytic writing about the industry greatly, but “if wishes were ponies…”

Permit me to clarify what I mean by lawyers [not] following the evidence: There’s “evidence” in their daily practice of law–working on disputes and litigious matters, and dealing with corporate and transactional business.  And then there’s “evidence” in how they organize, govern, and run their law firms as the for-profit enterprises they are.

In the practice of law.  One can, and we do, devoutly hope that lawyers follow the evidence in their work for clients.  One of the wisest, and first, things I learned as a baby litigator many years ago in a Wall Street firm was, “The most important thing for you to know is the greatest weakness in your own case.”  That would squarely depend on the evidence.  And just as forcefully true for corporate/transactional deals.  Is every material fact disclosed–accurately?  Any misleading omissions?  Etc.

On the other hand, certainly at the most rarefied altitudes of lawyerly practice, the art and science  of your profession consist mostly of interpreting, framing, and fitting the evidence into a compelling narrative, not merely determining or reciting what it is.  Did my client act with intent?  Was the asset valuation methodologically plausible, conducted in good faith, and rationally defensible?  You single out and emphasize the facts supporting your case, discredit or minimize the inconvenient ones.

And good for you!  That’s what effective legal representation is all about.

But then it comes to:

In running your law firms.  Not so fond of evidence, bordering on dismissing it almost entirely in some shops.  And if not evidence, to what do lawyers look for guidance in running their firms?  By and large, personal preference and comfort: Heart and not head.  This works splendidly on some levels, but I don’t need to enumerate where it might fall down.

A smart and worldly-wise friend once offered the penetrating insight that in running their own firms, lawyers follow “the reverse of the Scientific Method:”  Rather than proposing a tentative hypothesis and mercilessly tracking down data that do and do not support it in order to validate or refute it, lawyers assume and posit the outcome they want–“we are not going to measure profitability by partner!”  “nothing beats raw associate hours applied to discovery at getting to the bottom of things”–and then marshal, assume, or simply assert why their preferred position is correct.  (A very popular technique here is to argue by anecdote.  “Nobody who went to that law school ever succeeded here,” or “When Mr. Cruikshank was GC, he never would have endorsed such a thing.”)

Aggravating this behavior pattern is obviously the absence of any client, judge, or jury looking over your shoulder and policing at least your most egregious indulgences.

No snappy comeback to such [upside down] reasoning has yet come to mind.  We have even heard the managing partner of a highly successful and esteemed North American law firm question the utility of considering any data whatsoever in management decision-making.

That said, lawyers may be well and powerfully motivated by other factors–their sense of competitiveness, for example.

But evidence?  We were wrong.