OK, so we’re not quoted in the New York Times every day, and today we were, at not inconsiderable length, about Dewey.

Here’s the The New York Times piece published on the front page of today’s Business section, by James Stewart. 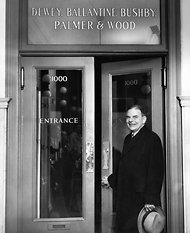 The photo is of three-time New York State Governor, Republican Presidential candidate (vs. Harry Truman), and Manhattan District Attorney Thomas E. Dewey—taken in front of the firm’s offices in 1955, the year he joined the firm and its name added his first to the previous four-name moniker to become Dewey, Ballantine, Bushby, Palmer & Wood.

24 hours after story was published, it was still #4 on the NYT’s “most e-mailed” list.